Fields: band and num are read-only. They cannot be edited here.

(They can be edited with external MySQL tools such as MySQL Front.
Please do not change them    - piWebCAT will not operate correctly if you do so!) 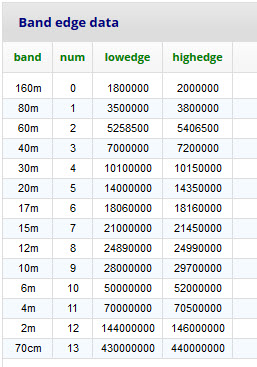 piWebCAT changes band in response to the radio's frequency moving into a new band.

On band change, the new band's tuning scale is displayed and the appropriate band button

piWebCAT's band display (tuning scale etc) does not  change on leaving the limits of the current band.

This behaviour is determined by the band limits set in this bands table  - which you can change.

The corresponding settings for piWebCAT's fourteen band tuning scales are separate
and are fixed in the program coding.

If, for example, the limits of band were extended, then you could change the limits here.
The tuning scale would not change. Tuning into the extended region would simply go off scale.

(until someone fixed the code!).